{"https:\/\/f0a20826c00e9d7a2251-705026f0dfbdd9ff017b1fa0935e2386.ssl.cf2.rackcdn.com\/515_c-21.jpg":"batmoo^:^http:\/\/www.flickr.com\/photos\/batmoo\/3735638680\/^:^https:\/\/creativecommons.org\/licenses\/by-sa\/2.0"}
Photo:batmoo
thechershowbroadway.com
www.facebook.com/TheCherShow
Bedecked in glittering Bob Mackie gowns, the cast of the Cher Show paint a dazzling picture of the iconic, indomitable Cher. The show follows the life of Cherilyn Sarkisian from her early years, through the peak of her career as a pop star, to her life as an icon. Featuring some of Cher's greatest hits, including "If I Could Turn Back Time," "I've Got You Babe" and "Believe," this jukebox musical spans the breadth of the multi-award-winning artist's remarkable career. An uplifting story of perseverance, with 35 of Cher's chart-topping songs and a book by Rick Elice, the Cher Show first premiered in Chicago in 2018, followed by its debut on Broadway later that same year. The show has been produced by Cher herself, and although she does not perform in it, it is shot through with her inspiring spirit.
FOLLOW
SHARE
FOLLOW
SHARE
0 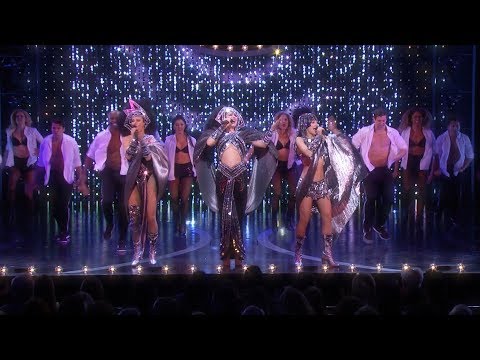 We’re so grateful for all of the love and support that you have all shown us throughout our run. You are ALL Goddess Warriors- each and every one of you!

It’s been the honor of a lifetime, chickadees. Thank you for all of the love and support. You haven’t seen the last of us. ✨

We wouldn’t change a thing, babes! Turn back time with us as we relive our journey to Broadway ahead of our final show tonight.

A Goddess Warrior never compromises who she truly is! Congrats to Diana Enterlin who is the final #GoddessWarriorOfTheWeek of our Broadway run!

Chers as far as the eye can see! #TBT to our Chicago run when our opening number included the entire female ensemble dressed as different versions of @Cher.

It ain’t everyday that costumes alone receive standing ovations. Yet, that’s exactly the sort of reaction @BobMackie’s designs have garnered from our audiences every night.

Before directing @TheCherShow, @JasonTMoore scoured through videos of @Cher’s entire life to piece together the thread that remained constant throughout her varied career.

We’ve only got one week left, chickadees! Who’s coming to help us say goodbye? TheCherShowBroadway.com

See what happens when you high kick fear in the butt?!? Congrats to Brittany Line (@hadyoubigtime) who is our #GoddessWarriorOfTheWeek!

This is far from over. Who knows how this sentence ends?