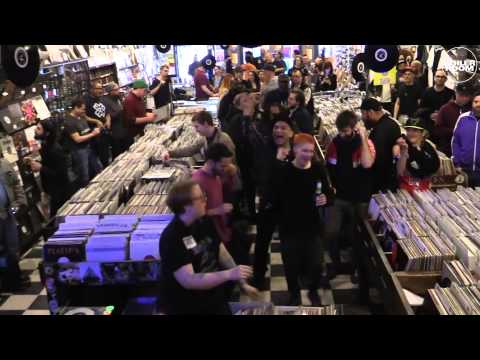 I’m delighted to announce that We Still Believe radio is joining the @rinsestagram family. I fell down the long rabbit hole of djing when I accidentally mixed two records together on the air on my college radio station. We didn’t broadcast far but the idea that anyone at all could be listening was a powerful experience and it pulled me into a dream that I continue to chase. We Still Believe radio has been a continuation of that original love of broadcast. Watching it grow around the world where we’re syndicated is a trip! But at the end of the day, I always dreamed we’d find a home in London too. And what a home we’ve found at Rinse FM. Everything about it feels great. The pirate history. The amazing programming. The easy commute! Tune in tonight from 9-11pm for a special first two hour show and then at our regular slot, Saturdays nights from 9-10 ❤#westillbelieve #rinsefm

It’s funny how the universe just drops people into your life magically right when you need them. When I met Teneil, better known to you as superdj @haaihaaihaai, I was getting ready to move to London (though I didn’t know that). We were at a lovely dinner together and I just instantly adored her. We clicked! As things worked out, we soon became neighbors here in Londontown and we share a whole amazing team of people that help make our dreams come true. Eventually we got to play together (as pictured) and that was absolutely magical. I just feel really lucky to have her in my life, but also more relevantly to you, I am so glad to say that we’re getting back together to do another b2b for our good friends at @dgtlfestival in Amsterdam. This show is going to be insane and special and out of control and we can’t wait to see all you freaks on the dance floor. Bam! .....#theblackmadonna #haai #dgtlamsterdam #westillbelieve

Lizzo forever! ❤️ It’s an astonishingly sad yet perfect illustration of how wrong things have gone on the internet, when the very person whose radical self love carried a lot of folks through 2019 is signing off in 2020 due to abuse on the internet. A look through the replies will give you a taste of the pure garbage that Lizzo deals with every day as a part of her job. To be clear, fuck all those people. Also, if you think that silencing strong women isn’t a conscious effort or goal on the part of a lot folks, I would urge you to see how many replies to her post go something along the lines of, “We got her.” Doing social media is a part of the requirement for promoting releases and tours now, as much or more so than press. I personally love it. I love speaking directly and when I want to. I love being close to the people who care about music as much as I do. I love meeting people around the world. I love sharing ideas and even vigorously debating them. But things aren’t that simple and being available for the good stuff around here often means that there’s no longer any mediation between an artist trying to do their job and a lot of very dark shit out there. I don’t wanna think about the kind of attacks Lizzo gets but I think we all need to. I’ve had enough if it myself to last a lifetime. And you know, you take it in stride, laugh with people, laugh at yourself. But there’s a limit and I hate to see another woman hit that limit. Abuse from thousands if not millions of people shouldn’t be the cost of doing business. There is no paycheck that can fix what that does to your spirit and I don’t know about you but I wanna live in a world full of spirits as brilliant and beautiful as Lizzo’s. I don’t know what the answer is but it starts with finding ways we can be more gentle with each other. We’re all just people.

What the hell am I supposed to be doing again? I’m a mega workaholic and I’m never at home on weekends and being home tonight I realize I have no fucking idea what to do. I’m pretty sure I found the end of Netflix. I have rebinged Schitts Creek. I’ve seen alllllll the true crime. It’s 11pm on a Saturday and I’m watching Kardashian spinoff shows and trying out different skincare products and Instagram filters in bed. I wish my skin sparkled like this irl. I’ve signed up for every yoga class I can this week. I’ve read till my eyes crossed. I went to the movies for the first time in a year. Anywayssssssss, I know I need the break but I am super duper excited to get back in the studio this week and to record the radio show. I think my work IS my hobby.

A Happy New Year to you all. For those who aren't already familiar with the @chooselove shop please do check it out. You can buy essential supplies to support refugees through the winter months like blankets, kids coats, firewood and hot food and you also can fund essential services like legal support, lgbt support and mental health care. Over the colder, darkers months, the need for all these services increases. If you can please do support. Every penny you spend is spent on what you select and for as little as £3 you can make a difference in someone's life this winter.Link in bio#chooselove #helprefugees

Happy birthday to the @registerrenee, the mama that not only raised me, but took in half the other ravers, punks, queerdos, degenerates and teenage delinquents in the Midwest. Not only is she the best mama, she is also the most chic as you see for yourself. I love you, Weezy!

2020 is almost here. I’ve been lucky enough to take another trip around the sun and many journeys around this planet with you. We danced at dawn in Brazil. We danced till Monday afternoon in Miami. We did it all night long in New York and Frankfurt. We took a whole block in Manchester, London and Los Angeles. And of course, as always, there was Chicago. I know how precious each of these experiences are. When you play a show anywhere, from Argentina to Tbilisi, people welcome you into their lives. It’s a big deal and I am so thankful to be able to do this. It takes armies of dancers to form communities, create events, run great club nights. I am grateful to be on this endless wild ride, forever chasing the fever dream of dance with all of you. Thank you for every sweaty hug, every message, every selfie. I love you all. Let’s have an amazing year. Thank you for believing.#westillbelieve

The time spent together with family is all the presents I need. But this year, my aunt Pauletta Hansel, who is also a wonderful and accomplished poet, gave us all the incredible gift of this long lost photo of my Papaw participating in a Jim Crow demonstration in Kentucky. I think of him constantly when I try to decide what kind of person I want to be. I wish each of you could have known him. Special isn’t a word that begins to describe his life. Today he reminds me of the real spirit of Christmas. Peace on earth. Goodwill to all. Make it happen in your own way today! Happy holidays from our family to all who celebrate ❤️