32285
Led Zeppelin
{"https:\/\/94f25d5fce3d6f1478b5-8492f2475187762e2e44cf8c753691ec.ssl.cf2.rackcdn.com\/32285-1.jpg":"Jim Summaria, http:\/\/www.jimsummariaphoto.com\/^:^^:^http:\/\/creativecommons.org\/licenses\/by-sa\/3.0\/deed.en"}
Photo:Jim Summaria, http://www.jimsummariaphoto.com/
www.ledzeppelin.com
Widely considered as one of the most influential and innovative rock acts in history, Led Zeppelin was an English classic rock band known for transcending music genres. Guitarist Jimmy Page and lead singer Robert Plant formed the band in the late 1960s with bassist/keyboardist John Paul Jones and drummer John Bonham. The band was signed with an unprecedented advanced deal to Atlantic Records in 1968 after playing its first show as Led Zeppelin at the University of Surrey, which the quartet followed with a tour of the UK and then the US. Feeding off of its rapid success, Led Zeppelin released its self-titled debut album in 1969, capturing its blues-inspired sound with echoes of English folk, hard rock, traditional Celtic music and heavy metal. The 1970s proved to be the band's most successful years, and its iconic 1971 untitled album commonly referred to as Led Zeppelin IV, remains one of the best-selling albums in history, selling over 23 million copies by 2006 in the US alone. The members all developed and created the "rock god" type, particularly Page, whose compelling and charismatic front man persona served as an archetype for legends such as Jim Morrison of The Doors and Mick Jagger of the Rolling Stones. Following the death of Bonham in 1980, the band cancelled its planned
North American tour and announced that it could not continue without all
of its original members. Throughout nine albums, the band's music ranged from psychedelic blues to flamboyant rock to glam metal, influencing several prolific heavy metal bands, hard rock, punk and alternative rock bands including Black Sabbath, Queen, The Ramones, Pearl Jam and Nirvana.
FOLLOW
SHARE
FOLLOW
SHARE
0
VIDEO
Immigrant Song 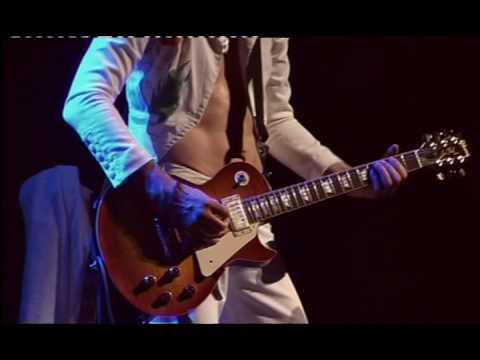